Its an oven out there!

Hope everyone is staying cool! 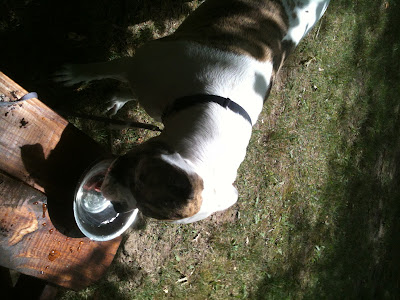 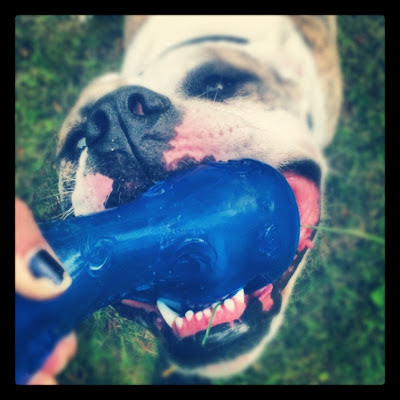 I have now lost count at how many of these squeeky Kong's Taricha has gone through. They are simply her favorite. No other toy gets her running, jumping, fetching, obsessing and tongue lol'ing. 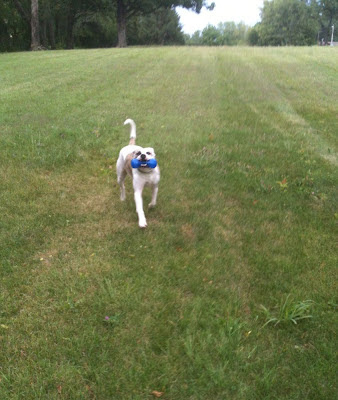 Usually they will squeak for a good hour before she punctures a hole. Then in a few days she has chewed an end off. Eventually the middle starts to crack and it breaks in half, then its to the trash. A new Kong arrives shortly after and she's happier than ever. 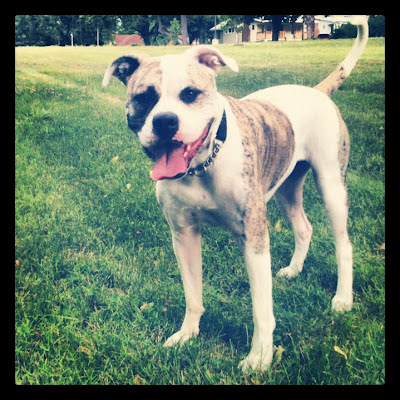 Working on things around the house cause its over 100F! Eeeee!
Posted by Taricha and Nyx at 5:25 AM 1 comment: 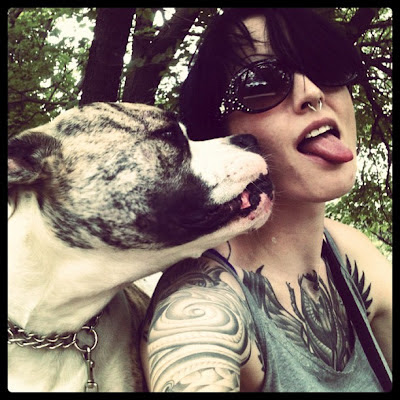 It's only been a little over a week since the outbreak of ringworm and it's already driving the whole house crazy. Its a battle.... no, a war. The animal posse doesnt seem to understand and arent helping!

Taricha wants love, so badly. She wants ear scratches and belly rubs and practically sits there crying for it... and I cant! She hates her fungicide powder baths, no matter how much cheese I wave infront of her face. Its stinky and every time she moves, a cloud of dust erupts. We've been going on walks but she needs more.. she needs visits to parks and my moms house to play with the kids. She's effing bored!

Both cats insist on scratching their faces, on everything. It seems to itch for them, not for Taricha and I. I feel like I've been following behind them with a bottle of cleaner and a touch of ocd. Oh and both cats haaaaate me for pinning them to rub them down with stinky things twice a day. Set is the worst because he has soooo much hair it takes me some time to get in there. Almost considering going to have him shaved. That'll be hilarious!

The good news is, we are on the mend, it's just a long, grueling, process. We've seen no new spots in a few days, we simply heal and move on! 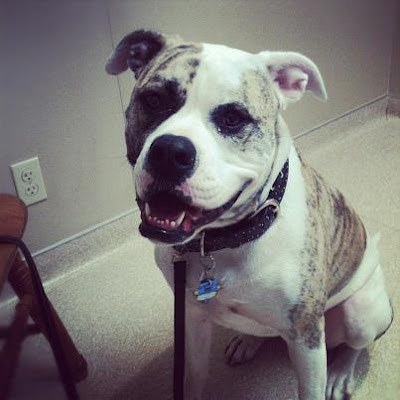 Not another Vet visit!
Some of the worst news ever for a dog.....
Quarantine! Nooooooeos!

Somewhere in our adventures, we picked up Ringworm. Which isnt a worm at all but simply a fungal infection... It totally snuck up on us. First I noticed Taricha had what I thought were bug bites, like a tick had grabbed hold and fell off (which happens often) but didnt think much of it. She's very thin fur'ed, some of the white is almost translucent, so every blemish is easily seen. Only two days later, she's breaking out all over..... so am I and so are the cats. Little round red spots that look like burns. UGHhhhhhh!

So we're spending a while tucked away in the house fighting this. Everyone has gotten coatings of very stinky substances and will continue to be tortured as such every few days. All beds, pillows and blankets are off to the cleaners. Carpets and hardwoods scrubbed. The only activity we can risk are walks... no playdates, no dog parks, no pet stores. We're fighting it and we're going to win. It's just a tad boring in the meantime.

PS. We're so thankful this is not an ITCHY version.

Ive been meaning to mention that our household has a new addition. Two new additions really because I dont think I've touched base on the king either. How dare I neglect to mention his majesty? 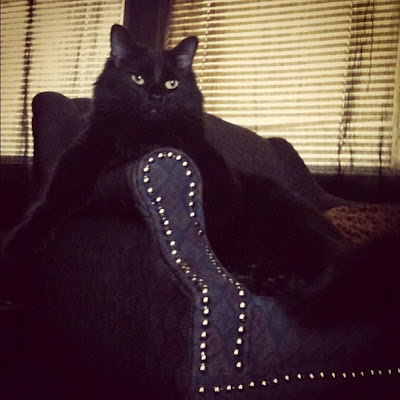 This kitty is Set. To start at the beginning... Taricha and I moved into our new house in January, leaving behind all her previous cat and dog roommates. Things were great but its a big house and we were feeling lonely. A local rescue group had some cats on display at a pet store as Taricha and I wandered in one day, I was instantly taken with this  black fuzzball. He was big fat and lazy looking when we first met him but Taricha agrees with me that it was mostly hair, as he was only 6 months old. We met him several times there in the store and a week later were finally able to bring him home. 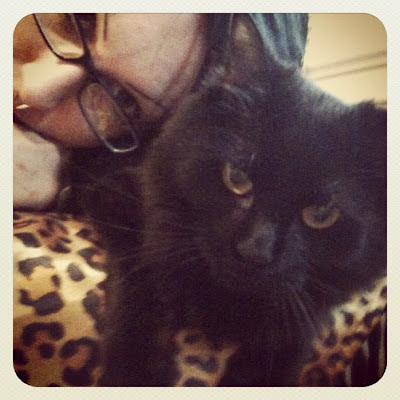 Set fit right in, taking over all household furniture and warming up to Taricha within only a few days. Still kind of a lazy cat, he prefers to be sitting next to me, begging for scratches, than doing much else. By begging I mean that literally, one of the most vocal cats ever.

Things were going awesome in our little family, when one day my sister calls me up. A friend of hers' mom had the last kitten of a litter looking for a home. A little grey kitten. My sister knows that I was kind of considering another cat and she knows me too well to know that I loved grey cats. Everything fell into place rather quickly. The next day I had a 8 week old effing loud mewing creature in the car seat next to me. 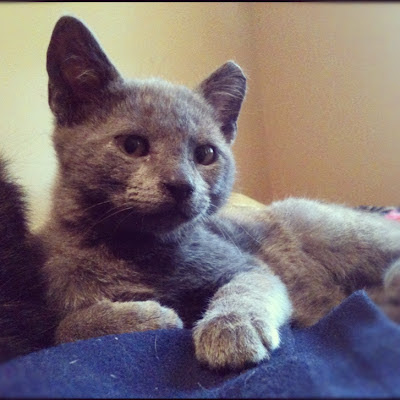 Who is now named Vincent. The name comes from the fact that he's missing a portion of one ear, for whatever reason. I think its rather endearing and lets him get away with more havoc than should be allowed. 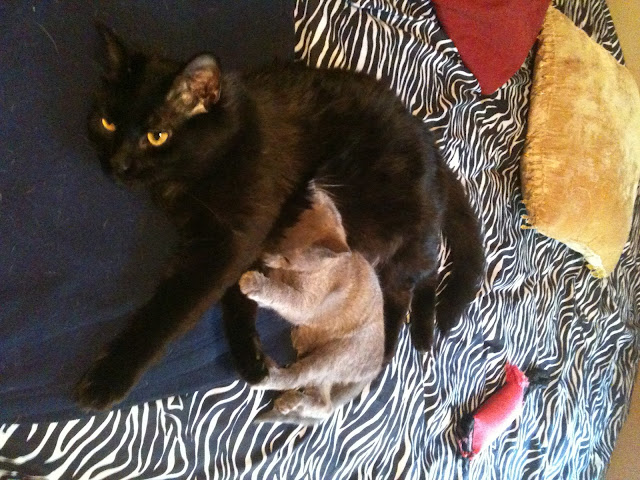 The two cats hit it off instantly. Set has always been super cuddly and affectionate. He'd rather snuggle than play so when he saw the tiny scared grey ball, he ran up and starting purring, cuddling and being a great father figure.

The two cats are completely inseparable now, only two weeks later. Vincent follows him everywhere and is still scared of a lot of things. people, noises, unless Set is there with him. Taricha seems a little bummed that the kitten wont play with her, but that will come in time I'm sure. My house will never be lonely again, the cats romp day and night from one end to the other. Every morning I wake up with both cats snuggled near my feet and Taricha at my back. Its a wonderful way to wake up.
Posted by Taricha and Nyx at 6:02 AM 1 comment: 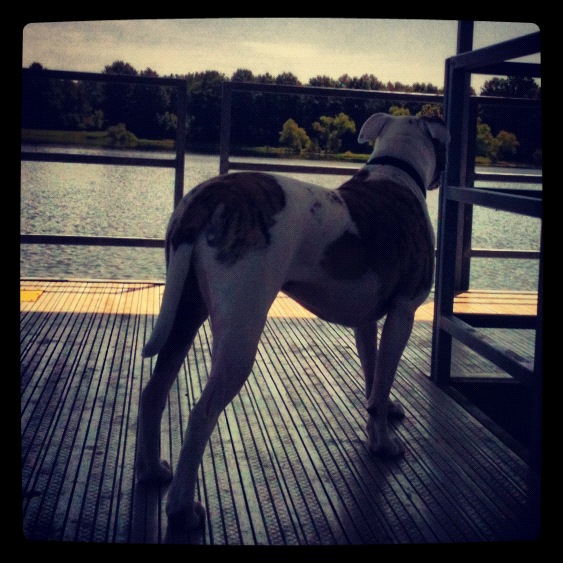 Its only been a week since the best package ever came in the mail... and we cant imagine life without it already. 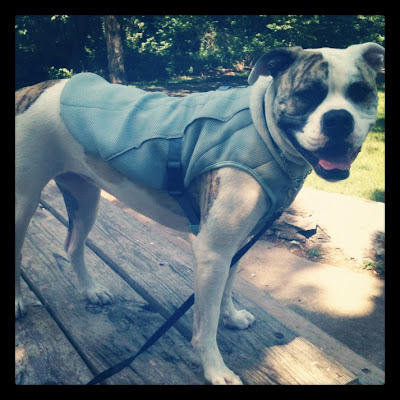 Taricha is sporting her new Ruffwear Swamp Cooler vest. The only downfall we have found is that it only comes in this awful ice blue, which seems to attract every piece of colored dirt. But onto the good stuff.

Taricha's always had a rough time with the heat. Any day with sunshine and above 80 degrees, she's panting hard, tongue loling and chest heaving. Impossible to get her to do anything productive so all she ends up doing is sitting around the house complaining at me that she's bored. 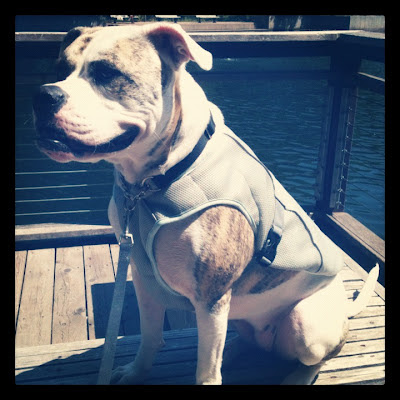 Instantly.... we noticed how awesome this Swamp Cooler is. Taricha can jog, at noon, in any heat and she barely cracks her mouth to pant. Every time I'd check under the vest, she was cool to the touch.

This vest is extremely simple to use, simply wet it with water, wring it out and wear. A single soak lasts a few hours. It fits well and seems well made (love the buckles!).

no other explanation needed. 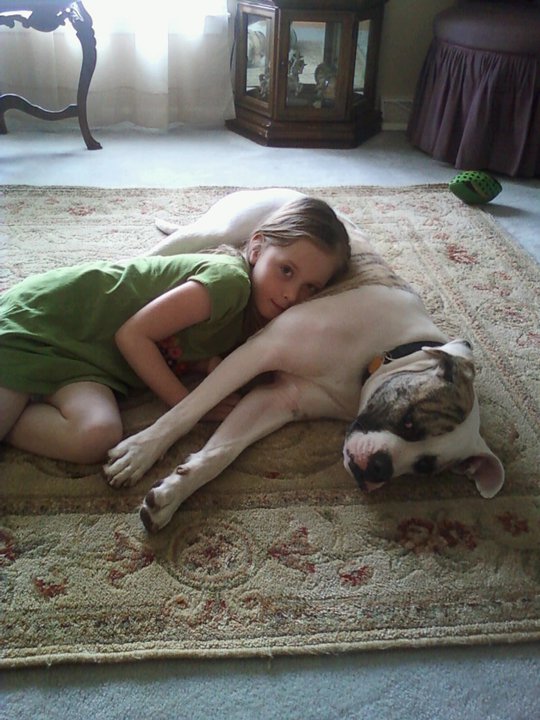 Taricha and Nyx
Kansas City, Missouri
An American Bulldog and her faithful human on their daily adventures. We romp, we train, we live the single life. Just a couple of girls hanging out somewhere in the middle of nowhere.